Ljubomir Tadić was born in Montenegro in 1925. He spent the Second World War as a partisan, and entered the Law Faculty of the University of Belgrade after the war, completing his studies in 1952. In 1959, he defended his doctoral dissertation in Ljubljana. Tadić started his university career in 1954 as an assistant at the Faculty of Law in Sarajevo, and soon became an associate professor. In 1962 he became a senior advisor at the Institute of Social Sciences in Belgrade. From 1963 until his dismissal in 1975, he worked as a full professor at the Faculty of Philosophy of the University of Belgrade.

In 1968, Ljubomir Tadić was one of the leaders of the student protests in Belgrade, beginning his conflicts with the government. After that time, he was often targeted by critics and impeded by the government. Tadić was also one of the Belgrade “Praxis” members. Praxis was a group of philosophers of the so-called “creative”, non-dogmatic Marxism that formed in the early 1960s in Yugoslavia. This resulted in his removal from the Faculty of Philosophy in early 1975, together with seven other professors and assistants, who were labeled "morally and politically unsuitable". This attack on the professors of the Belgrade University marked the end of the Korčula school, Praxis, and the journal Philosophy published by the Philosophical Society of Serbia.

From 1976, Ljubomir Tadić participated in the work of the newly founded Open University (known as Otvoreni [Open] or Slobodni [Free] in the literature). The aim of the Open University was the informal gathering (in private houses) and discussion on various social, political, and artistic topics. Many critically minded intellectuals gathered there, including Dragomir Olujić, Dobrica Cosić, and Lazar Stojanović.

Tadić became publicly active again in the early 1980s, together with Dobrica Cosić, Svetozar Stojanović, Zoran Djindjić, Nebojša Popov, Vojislav Stojanović, and others, when he tried to launch the journal Javnost [Publicity] in 1980. This paper sought to bring together critical intellectuals, and a call for cooperation was sent to over 400 individuals. The timing of the initiative’s launch, a few months after Tito's death, proved not to be the best. Political sensitivity at that particular moment resulted in its ban even before the journal was published.

One year later, Tadić was re-employed as a scientific adviser at the Center for Philosophy and Social Theory, founded in 1981, within the existing Institute of Social Sciences in Belgrade. This center would become where the intellectual democratic opposition to the Yugoslav regime gathered in the 1980s, and later similarly against the Milosević regime.

Together with Dobrica Costić, Ljubomir Tadić was one of the co-founders of the Odbor za zaštitu slobode misli i izražavanja [Committee for the Protection of Freedom of Thought and Expression] which was established in 1984. In the following years the work of the committee, which gathered mainly intellectuals from Belgrade, attracted public attention thanks to the publication of two texts - Predloga za ukidanje neopravdanih ograničenja sloboda i prava [Proposal for the Abolition of Unjustified Restrictions on Freedoms and Rights] (1985) and Predloga za uspostavljanje vladavine prava [Proposal for the Establishment of the Rule of Law] (1986). The Committee put pressure on the government and the public by organizing petitions in which hundreds of Yugoslav intellectuals participated. Initially, the Committee defended all critics of the government regardless of their nationality, but this changed when the political crises began at the end of the 1980s and it began engaging in other issues, particularly with the national Serbian cause in Yugoslavia.

In 1985, Tadić became a corresponding member of the Serbian Academy of Sciences, elected as a regular member in 1994.

Against the frequent accusations that he changed from a leftist into a nationalist, Ljubomir Tadić maintained in the weekly NIN (2004) that "In my books you cannot find that I have advocated some kind of nationalistic attitudes. But, in terms of justice and injustice, I have always made myself clear. Further on I consider that the Western policy is a great political injustice towards the Serbs. […] It turns out that the only aggressors are Serbs, while all the other are illustrated as the poor innocents. I cannot accept such an injustice, it is my determination. So, it is not a nationalist-chauvinistic view, but an attitude against the obvious lasting injustice."

Ljubomir Tadić passed away in Belgrade on December 31 2013. 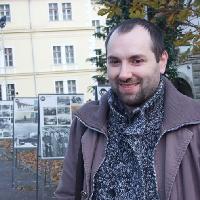 Architect Ovidiu Marian Taloş is the initiator of the Orașul Memorabil (The Memorable City) project, whose purpose is to salvage the photographic heritage concerning the history of the city of Braşov. Born in Braşov on 21 June 1978, Taloș studied at the Ion Mincu University of Architecture and Urbanism in Bucharest from 1997 to 2003. In 2005, he took his master’s degree in the Anthropology of the Sacred Space at the same university. Since completing his traineeship, he has practised as an architect in Braşov. He is a member of the Romanian Order of Architects–Braşov, Covasna, and Harghita Branch (Ordinul Arhitecţilor din România–Filiala Teritorială Braşov, Covasna, Harghita) and of its territorial committee, one of the leading structures of this regional branch. Professionally, he has distinguished himself through awards received for architectural projects, namely, first prize at the “No man’s land-uri urbane” (Urban no-man’s-lands) contest organised in Braşov in 2009 and an honourable mention at “Open Source House–Ghana” at Delft University of Technology the following year.
In 2010, he laid the foundations of the cultural project Orașul Memorabil, which he coordinated with Miruna Stroe. By virtue of numerous people’s providing photographic material, the project gave rise to a digital archive reflecting the history of Braşov through daily life. Approximately a third of the Braşov–Oraşul Memorabil Collection covers the communist period. Some of the photos reflect the photographers’ critical view on social realities in communist Romania. Exceptional cases in point are those photos that feature the urban policy of the communist authorities, which led to the demolition of buildings and even whole areas in Braşov. The project’s photographic archive has been promoted through annual displays placed in public spaces in Braşov, but also through the project’s online website. Using the photographic heritage of the Orașul Memorabil project, Ovidiu Taloş has set up exhibitions hosted by the Romanian Cultural Institute in Budapest (2012–2013), the Romanian Cultural Institute in Vienna (2014) and Haus des Deutschen Ostens (House of East European Germans) in Munich in 2014. The exhibitions were organised in collaboration with the GIL Corona association and the Romanian Cultural Institute. Apart from the Oraşul Memorabil project, Ovidiu Taloş initiated and coordinated from 2012 to 2015, together with Miruna Stroe, the cultural projects Arhitecții și arhitectura în Brașov, 1870–1914 (Architects and architecture in Braşov, 1870-1914) and Arhitecții și arhitectura industrială în Brașov (Architects and industrial architecture in Braşov). These projects were financed by the local authorities of Braşov and from the architectural stamp tax collected and administrated by the Romanian Order of Architects.

After secondary school, Sigitas Tamkevičius started studying at the Catholic seminary in 1955. In 1957-1960 he served in the Soviet army, and in 1960 he continued his studies at the seminary. In 1962, Tamkevičius was ordained a Catholic priest. In 1962-1975, he served as a parish priest in the Lithuanian countryside. He became a Jesuit in 1968. In 1969, the Soviet government forbade him to serve as a priest, and he was forced to work in a factory. In 1972-1983, he initiated and edited the Chronicle of the Catholic Church in Lithuania. Tamkevičius established a committee for defending the rights of believers in 1978. In 1983 he was arrested and investigated by the KGB. In 1983-1988, he was imprisoned in a labour camp in Perm and Mordovia (Russia). During the national revival, Tamkevičius became head of the Catholic seminary, and in 1991 he was consecrated as a bishop by Pope John Paul II. In 1996 he became an archbishop, and in 2005-2014 he was chair of the Conference of Lithuanian Bishops. He served in this role until 2015.